In Kiev in the street passers-by found the grenade 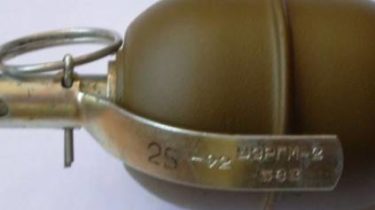 In Solomenskiy district of Kiev passers-by in the street found the grenade.

“From bystanders, it was reported that on Povitroflotskyi Avenue found a grenade”, – stated in the message.

Law enforcement officers who arrived on call, found a grenade RGD-5 with fuses.

As noted, reports of a bomb threat at this address the police were reported, no injuries.

Now police are trying to determine the person who left ammunition on the street, to the malefactor threatens till seven years of imprisonment.

We will remind, earlier in Kiev on the street Teligi in the morning on the Playground found a grenade. The two men noticed the suspicious sand ring, and when dug out, saw an object resembling a grenade.