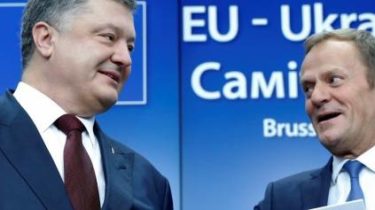 The President of Ukraine Petro Poroshenko held a telephone conversation with President of the European Council Donald Tusk.

Tusk congratulated the Ukrainian guarantor with the ratification of the Association agreement EU-Ukraine by the Senate of the Netherlands.

Policy coordinated the schedule of entry into force of the Association agreement and discussed the agenda of the summit Ukraine-EU which will take place in Kyiv on July 13.

Also, Tusk said Poroshenko on the results of the meeting “Big seven”, which took place in Italy.

They discussed the situation in the Donbas, Poroshenko drew attention to the persistent violation by Russia of the Minsk agreements and urged the EU to extend sanctions against Moscow.

As previously reported, on 30 may the Dutch Senate voted for the Association Agreement EU-Ukraine. In Parliament the vote took place without discussion, the deputies expressed the will get up, because the legislature does not apply the electronic voting system.