Kadyrov is crazy: Okueva told about the preparation of other attempts to assassinate “killer Putin” 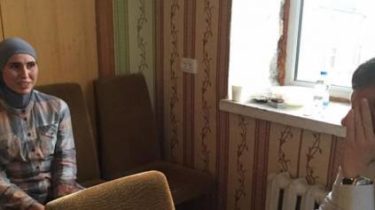 Wife wounded in Kiev as a result of firing of the former head of the battalion name Dudayev Adam Osmayev amine Okueva said that the first time was preparing an attempt on the life of her husband.

“Of course, we have information that in Ukraine have detained the man with the explosives, which had to put Adam under the car. While we do not Express details. We constantly get information from different sources that the FSB is engaged in order to eliminate Adam. Plus Kadyrov. Kadyrov generally going crazy. He’s a hundred thousand each, almost homeless, gives, who agrees at least to do something,” said Okueva.

According to her, after the gunshot wounds Osman is now in the hospital, conscious and understands everything, but can’t talk. He received one puncture wound to the chest. The wound grazed the right lung, diaphragm and upper part of the liver.

Recall that Arthur Danisultanov-Kurmakaev that in the Podolsk district of Kiev wounded volunteer ATO Adam Osmayev, tried to enter the environment of the RPL leader Oleg Lyashko. This was announced by the people’s Deputy Igor Mosiychuk.

According to the parliamentarian, Lyashko learned of Sagittarius. He had contact with the leader of the radicals under the guise of a journalist.