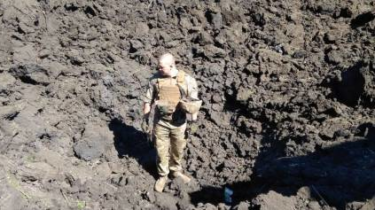 The speaker of the press center of staff ATO Anton myronovych released a photo showing the craters from shells fired by militants on positions of AFU in the area of Avdeevka.

This photo Mironovich has published on his page in Facebook.

According to him, the shell arrived last night, June 2, in the suburbs of Avdiivka, where the position of the APU. He also said that judging by the scale of the crater, the men assume that the projectile could be fired from MLRS “Grad-P”.

“About 3 m deep and 7 m wide. These are the consequences “greetings” from “young Republic.” Arrived yesterday evening, still light, on our positions in the suburbs of Avdeevka. The nature of the explosion first thought it was a 120-mm mine. Subsequently, having examined the funnel, there were suspicions that this missile from a portable version of MLRS “Grad”. At least the crater was found in the wreckage is very similar to the remains of the ammunition,” wrote Mironovich.

He also noted that militants often fire at positions of forces anti-terrorist operation of the portable “Grad” from the terminal of the WCT.

Recall, this morning, June 3, at the headquarters of ATO reported that the situation in the ATO area remains difficult, with partial signs of deterioration in certain areas. Russian-terrorist gangs continue to use weapons against Ukrainian forces, are increasingly using and is prohibited by the Minsk agreements, artillery systems. So, in the last days the enemy is 53 times opened fire along the line of contact.