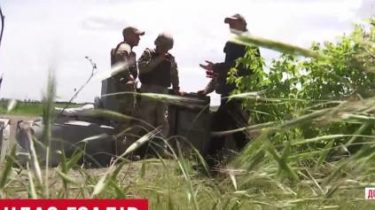 The situation in ATO area remains difficult, with partial signs of deterioration in certain areas. Russian-terrorist gangs continue to use weapons against Ukrainian forces, are increasingly using and is prohibited by the Minsk agreements, artillery systems. So, in the last days the enemy is 53 times opened fire along the line of collision.

This is stated in the summary of the press center of the ATO headquarters for the past days as at 06.00 hours on 3 June 2017.

“Coastal areas. Almost half of the facts of violation by fighters of the agreement on a cease-fire falls on this sector of the front. 25 times here, the bandits beat on our positions. In particular, the 120-mm mortar shells yesterday, the enemy repeatedly fired at the Ukrainian fortifications in the area Chermalyk. And from the Western outskirts of the temporarily occupied Donetsk militants several times from 82-mm mortars opened fire on strong points of ATO forces near Marinka. During one of these attacks, around 17.00 hours, a few enemy mines fell on a residential quarter of the village. As a result of such treacherous actions of the NFP two local residents were injured”, – reported in the headquarters.

Also add that yesterday was restless and in other areas of this direction. In particular, in the area of Water, Gotovogo, Talakovka, Pavlopol, Bogdanovka and Novotroitsk bandits repeatedly fired rocket-propelled grenades and small arms of various calibres. Near Bogdanovka Ukrainian soldiers were actively fired by the enemy sniper.

“Donetsk direction. There for the last days, the situation again deteriorated. In particular, it is again restless in the southern and Eastern suburbs of the Town, where the enemy yesterday several times opened fire on our strong points from 120-mm and 82-mm mortars, also from weapons of lower power. In addition, the 120-mm mortars and rocket-propelled grenades, the militants fired at Ukrainian soldiers who hold the Fort in close proximity to the Sands. From heavy machine guns beating the occupants and close the Questionnaire. And from the vicinity of the temporarily occupied Horlivka Pro-Russian armed gangs using grenade launchers of various modifications and armament of infantry fighting vehicles, carried out the attacks on our strongholds in the area Zaytsevy and Maori”, – reported in zwergen.

Day without loss. The headquarters of the ATO has published a report on the situation in the Donbass

And on the Lugansk direction the past days recorded 14 instances of the use of the Russian-terrorist groups of weapons. The majority of them in the dark. So, again under enemy fire was the strengthening of the armed forces of Ukraine near Novoaleksandrovka, Novozvanovka, krymske and Stanytsia Luhanska, where the militants fired rocket-propelled grenades and small arms. In addition, near the Crimean enemy opened fire from APCS. And near the station of Donets invaders have used against Ukrainian soldiers 82-mm mortars.