We are fine: Holodnitsky did not want to “fall through the floor”, commenting on a quarrel with the head of NABOO 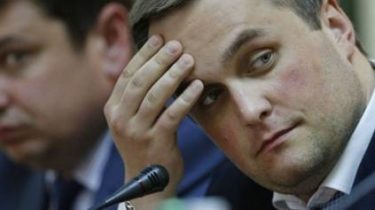 He said this in an interview with TSN, commenting on the scandal about the interview rush “Ukrainian truth”.

In response to the journalist’s claim that earlier, when the head of the SAP with Sytnik worked in sync, everything was fine, Holodnitsky said, “we Have now all is well. Absolutely right. The investigation is continuing, is being investigated, suspicions are put forward”.

To the question about what angered the disturbance in the work of the SAP, Holodnitsky said:

“Let’s ask him. But some approved, and some points that were covered in this interviewin particular, I as the Prosecutor, procedural head, the head Prosecutor, who then go to court with this evidence, is a concern. Serious. Data about the disclosure of the investigation, I’m not talking about any sort of personal insults, on metastases, as you say, it’s emotion. If we give in to emotions, then it will have a devastating effect. We will not do this. And to answer thereby, we will not. We’re just doing our job”.

“Therefore the logic is simple: there is evidence, there is suspicion, there is an act and the judgment. No proof, no suspicion. It’s very simple. We are in SAP not only needs to be extras and to sign anything that will bring investigators or detectives. The Prosecutor’s office according to the Constitution, not the Law, is the body that performs procedural management. That is, according to article 36 of the criminal procedure code, supervision over legality of actions of bodies of investigation in the form of procedural guidance,” said Holodnitsky.

The head of SAP reiterated that a Prosecutor’s job is to go to court with evidence, not “likes” with Facebook.

“The Prosecutor is the procedural head. It defines the strategy of the business, its vision and him then go to court with this evidence. Not to operate Facebook-likes or briefings, as evidence in court. And this evidence will only operate on the public Prosecutor”, – he said.

The Holodnitsky added that after the scandalous interview, he spoke with Rushes, and also added that sometimes blame the press service.

We will remind, several days ago the head of the Bureau Sytnyk gave an interview in which he made accusations against the head of SAP Nazar Gorodnitskogo. Sytnik not only divulged the details of the investigation in the criminal process, but also expressed a personal dislike to him. The publication Sytnyk, in particular, were apprehensive about a possible merger of departments, noting that the metastases SAP infiltrated NABOO.