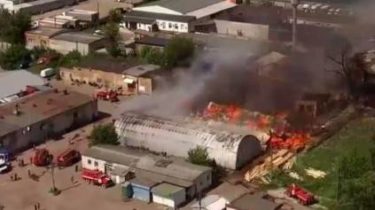 Units of the State service of Ukraine on emergency situations in the night against Tuesday, June 6, was liquidated a fire in the town of Brovary, Kiev region.

This is reported in gschs, writes Interfax.

It is noted that as a result of a fire fire destroyed and damaged structural elements of buildings and products of wood, which was in the middle of an area of about 1500 sq. m.

In Brovary near Kiev broke out a large-scale warehouses with fuel, rose into the sky black column of smoke

Injured in the incident. To extinguish the fire was brought 12 pieces of equipment and 46 people.

Currently, the cause of the fire.

We will remind, on Monday, June 5, in Brovary on the territory of the former vegetable base a fire broke out in a one-story metal indoor hall appeared in 13:26.