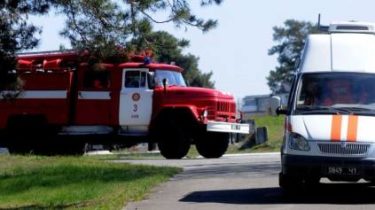 Today, June 6, in Kiev there was a fire in private residential house on the street. Union, 21.

Information on incident arrived to rescuers at 13:34.

At the scene it was determined that the fire originated on the 1st floor of a two storey private dwelling house.

According to preliminary information, no victims.

On the scene are divisions of gschs.

Recall, units of the State service of Ukraine on emergency situations in the night of Tuesday, June 6, was liquidated a fire in the town of Brovary, Kiev region. It is noted that as a result of a fire fire destroyed and damaged structural elements of buildings and products of wood, which was in the middle of an area of about 1500 sq. m.

Injured in the incident. To extinguish the fire was brought 12 pieces of equipment and 46 people.

Currently, the cause of the fire.