In the house, which has a 4 hour burn in Kiev, was a private STO 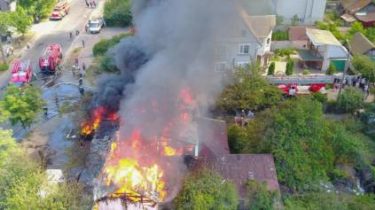 The fire in the residential district of the capital. The fourth hour in a row, rescuers extinguished the fire, which arose, according to eyewitnesses, from-for explosion of a HUNDRED, located in a private courtyard, says TSN.16.45.

It all started about 13:30 the yard near the Darnitsa area lit up so strongly and quickly that the fire almost licked the house. The fire began in the garage and spread to the house. The fire was so high that quickly pulled and wires. Eyewitnesses said, fireworks the middle of the day they are very scared and de-energize the entire area from the light and the Internet.

With fire firefighters are still struggling. Closer approach nebezpecna. As there is a threat of explosion of a gas cylinder. He has exploded early in the fire. And in the middle is still not hesitate to go rescue.

Not on camera, neighbors said, in this yard was a HUNDRED. The owner repaired the car. About this version told in gschs.

Fortunately, no injuries. Firefighters managed to stop the fire, so it does not spread to the neighboring houses. The owner of the house refused to speak. The man escaped with minor burns. Family at this time was not at home.