Left ammo and equipment. Tymchuk told how the rebels lost a number of positions in the Donbas 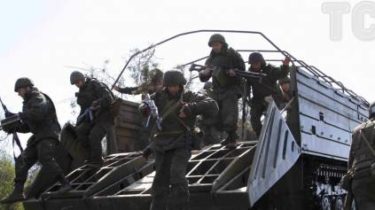 Militants in the Donbas have left their positions and lost several sites in the area of Kalinovo, Mikhailovka, Bakhmutskaya track. Here the promotion of APU varied from 350 m to 1.5 km, according to the coordinator of group “Information resistance” Dmitry Tymchuk.

“Command” in ORDA under the pretext of possible introduction of martial law, mobilizing

“Command “2nd AK LC” at the meeting held with the participation of the commanders of the units and demanded that subordinate units “unconditional” hold positions, as well as undertaking a “range of measures” to regain control (at least fire) for lost items”.

Also, the command of terrorists, stated a significant reduction from the APU of the distance of the effective firing: in some areas the distance was reduced from 800 m to 1 km up to 300-400 m. Now in a gun fight Ukrainian troops have the ability without the use of Minsk agreements prohibited weapons firing way to influence the forefront of the militants, he said Tymchuk.

At the meeting it was said that the militants threw ammunition and equipment and not mined reserve position. Commanders of the terrorists cited a number of difficulties – the inability to retain certain units for their defence sectors very limited number of personnel; the lack of ammunition, equipment; low level of equipment and weapons subordinate units.

Earlier it was reported that in the Crimean Ukrainian army have built a strong point near Bakhmutskaya track, a mile farther from the previous one. Still, this area was a gray area and the enemy put mines here, including forbidden by the Geneva conventions. Was found military and the residues from shells of the system “Buk”. We collected several bags of explosive objects.