The Kiev firm “cheated” of future workers for a few million 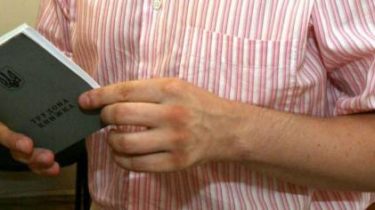 In Kiev the company “KSD plus”, which was allegedly engaged in the employment of people abroad was to arrange hundreds of Ukrainians in the EU, for services took 300 euros. But the timing of sending people constantly postponed for several months. When the workers ran out of patience and they are the regions began to go to the capital, it was found that the doors of the company are closed.

Leonid wanted to work in Belgium.

Potential workers, no one at work is not staged. When the firm stopped taking phone – people rushed to the office to collect the funds. But the doors of the company no one answered. Called the police, wrote a statement.

About the company a little information: “kih plus”, owner Ivan Koloverti have the code AGPO. On the website of the Ministry of social policy information on the availability of this company has a license for employment abroad no.

License is the first thing you should pay attention, said the Association of companies for international employment. ‘On the license and the location of the firm must coincide, and it is better to pay by Bank transfer.

“In the contract shall be prescribed by the licensee, who is issued this license. This may not be a Spdshnik (FLP). If you say when you come, we can arrange you and to Canada, and the United Arab Emirates, and in China guys, you just want to take the money. In reality I have not met more than 2-3 countries and usually it’s the EU”, – said Vasily experience with the first voskobojnik.

Lawyers say that even when all the ends cleaned up, the chance to punish someone – there.

“If you know who the head if he wasn’t rated, you can appeal to the state Executive to ban check out this head for the border. You can take actions against employees of this company, to seize the accounts, to prohibit certain actions”, – says the lawyer Nikolai Hahula.

The lawyer says that most of the deception lies in the contract instead of employment provide information and consulting services.

“In fact, the company is not responsible for the fact that it does not suit a person to work abroad,” says Nicholas Chachula.

Meanwhile, police are investigating it already, but for some reason it’s not qualified as a large-scale fraud, and as a small for the first part of article 19 of the Penal code, and there liability is limited to an administrative fine. Although lawyers say that it pulls at least part of the second, which prescribes punishment in the form of imprisonment.