“I am a citizen of the greatest country”. Zhirinovsky has prepared a version of the oath for citizenship of the Russian Federation 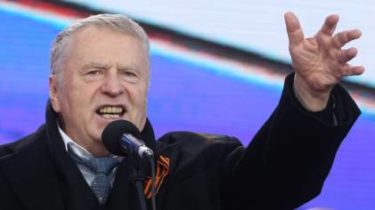 The leader of Russia’s LDPR faction Vladimir Zhirinovsky has prepared its own version of the oath to obtain citizenship of Russia.

“Joining the Russian citizenship, I am overjoyed that today I am a citizen of the greatest country on this earth. And I will never betray you, Russia will never be able to go on about your enemies and I will always be proud that I’m your son. And these six letters – Russia – will always burn my heart’s highest love for my great country”, – said Zhirinovsky in a prepared text of the oath.

According to him, “now the man with a positive decision to obtain Russian citizenship just gets a passport like some help”.

“And it’s a huge responsibility to the country that trusts you, which takes into its ranks. Therefore, I agree that you need before obtaining a passport to swear an oath of loyalty to Russia,” he said.

We will remind, earlier Russian President Vladimir Putin proposed to introduce a swearing in ceremony or oath for those who enter into the citizenship of the Russian Federation. In this regard, in the illegitimate state Duma established a working group to establish the text of the oath of admission to citizenship, which included representatives of all factions.