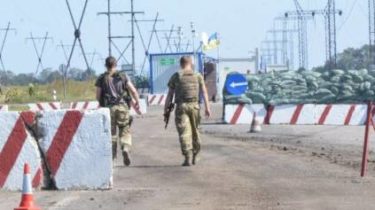 The militants fired at the checkpoint “Marinka” small arms and AGS-17.

“Yesterday (6 June approx.ed.) in Donetsk Russian-terrorist troops again fired at positions of the control post “Marinka”, where guards are deployed along with the military personnel of armed forces of Ukraine”, – stated in the message.

According to the border guards, the militants began firing at approximately 21 hours from the occupied village of Aleksandrovka.

Separately noted that none of Ukrainian military was not injured, return fire was not opened.

“Since the beginning of the year recorded more than 30 attacks of units of the State border service of Ukraine”, – added in Department.

We will remind, for the past day the militants 85 times opened fire on positions of armed forces of Ukraine, shelling residential quarters of frontline settlements. In the fighting over the past day, 8 soldiers of the ATO forces were injured.