In China, angry investors of the zoo in front of visitors left the tigers living donkey 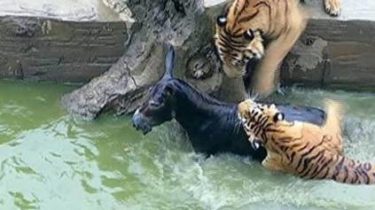 Visitors to a Chinese zoo witnessed a horrible sight when a group of men threw a live donkey in the cage with the tigers.

About it reports it to the Daily Mail.

The incident occurred in the city of Cacio in Eastern Jiangsu province. The cage truck pulled up, got out men in plastic raincoats and left the donkey to the tigers. Predators pounced on the animal and half an hour tore.

Men in raincoats wanted to throw in the cage and a live sheep, but the guards and visitors to the zoo to stop them.

In Britain, a tiger attacked an employee of the zoo

The zoo issued a statement on social networks, in which he stated that the incident occurred due to litigation between investors. The dispute, which lasts for two years, made it difficult for the company business.

Investors do not see profit for two years, which makes them very “unhappy,” the statement said. They were so unhappy that grabbed the “a donkey and a sheep” to feed the tigers.

Hunting and predatory kisses. Reuters showed the life of well-fed tigers in China

In its statement, the zoo asked the court “as soon as possible to resolve the dispute”, ominously noting that “otherwise, investors will solve it in other ways”.