Put the interests of Ukraine. Poroshenko requires responsibility for the gas contracts Tymoshenko with Russia 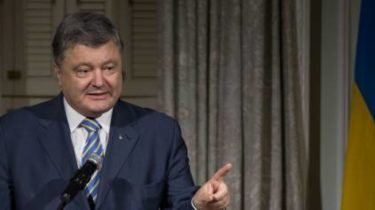 President Petro Poroshenko said about the need for political responsibility for signing gas contracts with Russia in 2009.

“I say today about what needs to be responsibility. I’m not talking about criminal responsibility – and this is not the case of the President, after all, is the appropriate bodies, I am talking about political responsibility: when you put the country to its knees and today it is proven not by politicians, not the experts as the highest international judicial authority. It is proved that put the interests of Ukraine”, – said Poroshenko.

The head of state recalled the recent decision of the Stockholm arbitration, which overturned the principle of “take or pay” gas contract.

“Predatory principle “take or pay” means: no matter how much you have consumed gas, will pay for 52 billion cubic meters, of which we had never consumed. And here were placed the criminal signature and its obligations is absolutely illegal, non-market and corruption”, – he said.

“Requirements of Gazprom’s “take or pay” fully rejected. The Tribunal has also completely lifted the ban on re-export of gas”, – is spoken in the message of the NAC.