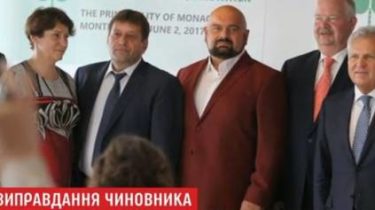 Deputy Prime Minister Vladimir Kistion explained his meeting with Mykola Zlochevsky in Monaco that he went to an energy forum, not the ally of Yanukovych, is reported in TSN issue.12:00.

The photo where Question together with the head of the tax Committee of the Verkhovna Rada Nina Southerner in the company of a former Minister of the environment appeared before and caused heated discussions in social networks and in Parliament.

Zlochevsky was accused of embezzling the bowels, and after independence he fled from Ukraine. Now, along with the Adam Smith Institute, he is the co – founder of energy forum. Question said that did not know about and to visit the forum had to, because among other things there was discussed the issue of “Nord stream-2”. And photographing said Protocol.

“Mr. Zlochevsky was photographed after the panel. If you notice, there were present the Prince of Monaco, and ex-President Alexander Kwasniewski,” – commented on Question.

We will remind, in January, the scandal rose around the Zlochevsky meeting with the first Deputy Chairman of the faction of the BPP Igor Kononenko. However in the GPU this meeting is not interested, because in 2016, the case against illicit enrichment Zlochevsky was closed. Human rights activists from Transparency International Ukraine demanded the case against ex-Minister to resume, and the officers of head office to prosecute.