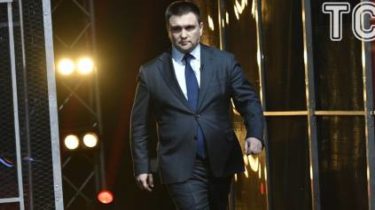 The Minister of foreign Affairs of Ukraine Pavlo Klimkin supported the idea of a visa regime with Russia. However, the diplomat stressed that the question for discussion is wrong, UNIAN reports.

“I believe that even the introduction of a visa regime in the context of control of who comes from the Russian Federation, is not enough. We have to introduce biometric passports, but then more and control those who come. It means announcing trips, and it all can be done quite effectively in the Internet”, – said the Minister.

However, Klimkin urged everyone to be realistic. “But let us clearly understand what we have. Actually we perfectly understand that we have war, we have the collapse of the Empire, but that almost three million Ukrainians are on the territory of the Russian Federation, about 7 or 8 per cent,” he said. And added that you should also consider “our citizens” who “are in the territory of temporary occupied Crimea.”

Furthermore, the diplomat was advised to provide counter Russia’s actions. “So, the answer is definitely Yes, but this is a question that need to be resolved in time, and from the point of view of these procedures based on a clear approach and understanding of how Russia will try to interrupt,” – said Klimkin. And suggested that Russia will try to “draw” the Ukrainians in their citizenship, and it should be prevented. “Cook, have relevant experience, so the foreign Ministry in this regard not to worry,” he concluded.

At the same time, in may the majority of the members of the faction “block of Petro Poroshenko” in the Verkhovna Rada did not support the initiative to introduce a visa regime with Russia. This was stated by the Deputy head of the faction Alexei Goncharenko.