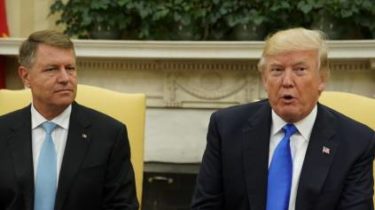 Romanian President Klaus Iohannis believes that Russian aggression negotiations can be conducted only in the presence of a powerful policy of deterrence by NATO.

This was osabel on Friday, June 9, during a joint press conference with US President Donald trump at the White house, UKRINFORM reports.

“In my opinion, we need a dialogue, but on the other hand we need something that we work together in NATO – a powerful policy of deterrence. This combination is a powerful deterrence and dialogue – should lead to a solution which will be acceptable to all parties”, – said Iohannis.

The Romanian President noted that Russia’s actions, its aggression against neighboring States, is of concern in the region.

“All concerned, but know the feeling of anxiety should lead you to readiness. In my opinion, we should be very clear and Frank and direct, if we talk about Russia and with Russia”, – he added.

We will remind, on June 8, the Verkhovna Rada adopted the decision on Ukraine’s integration into NATO as the main vector of foreign policy.

However, President Petro Poroshenko after the adoption of this decision stated that to talk about applying for membership in NATO is premature.