A day in the area ATO: intensive shelling in the area Bakhmutskaya track, damaging the filtration plant 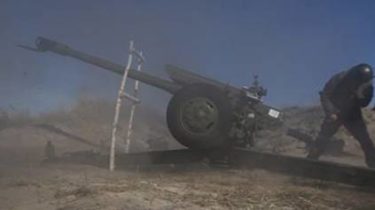 Pro-Russian rebels on Sunday, June 11, carried out 28 attacks in the zone of the antiterrorist operation in the Donbas. As a result of attacks of losses among the Ukrainian military aren’t present, but damaged the homes of local residents and important infrastructure facility in the region.

In the seaside direction fighters from cannon artillery caliber of 122 mm hit on the fortifications of the APU in the area of Pavlopol near Gotovogo used the 120-mm mortars, in the area of Talakivka and Water – small arms, grenade launchers and APCS.

In Donetsk direction separatists fired at Ukrainian military positions in the suburbs of the Town of 82-mm mortars and infantry weapons. In addition, militants fired more than ten min of the 120-mm mortar shells at reference points near the APU Verhneuralskogo.

Around 7 am, the militants fired rocket-propelled grenades and knocked out the pumping station of the first ascent of the South Donbass conduit. Victims among the personnel of the station no, but hundreds of thousands of people indefinitely left without water. At about 11.00, the firing position of the APU in the area of Zaytsevy, the separatists got a grenade in the house of local residents, but none of the civilians suffered.

On Lugansk the direction the situation is tense. Under fire from militants again hit positions of the Ukrainian troops located in the area Bakhmutskaya track. In particular, near the Crimean separatists and Novomoskovskoe repeatedly fired at the military from 120-mm mortars, cannon artillery of 152 mm caliber, and grenade launchers. From heavy machine guns and grenade launchers Pro-Russian militants also fired in the area of the Trinity, Novoaleksandrovka and Popasnaya.