Fighting under the Groove. Why the militants went on the offensive and like ran without a flag and of the bodies of the brethren 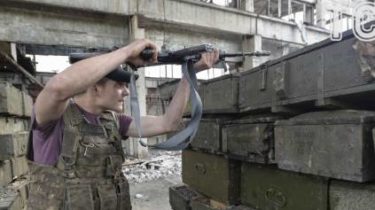 As the correspondent Evgeny Zvecanska, the enemy fired at Ukrainian soldiers among the houses in the Groove. This area is well known after a fierce confrontation in the battle for the 31 and 32 roadblocks. At the end of 2014 the Ukrainian Armed Forces left the territory of 32 checkpoint after the announcement of the Minsk agreements and the drawn lines of demarcation. In January 2015, Pro-Russian terrorists recaptured 31 checkpoint.

While the military APU returned a mile around the track at Bakhmut, where a new position. Now the road is partially taken under fire control. It is not like the militants, although it was news to “LPR”.

Therefore, a sudden panic surge in occupation and the Russian media about the onset of the APU and the beginning of attacks and attacks very surprised our army.

Press Secretary of the separate mechanized brigade, which reflects the advance of the militants, Andrew assures that there continues to be a classic information operation. This is a reason to intensify their actions.

The militants preparing to attack, in a village in Luhansk region, military equipment being moved – 93rd Ombre

“They write about the attack, occupied the heights, although height 175.9 for a long time already behind us. Fired at settlements of local residents. This is prepared. They immediately send a message that they this question will raise in Minsk”, – said Andrey.

The events occurred not even on the newly built army positions. They are on the other side of the Groove. The epicenter of the clashes was the famous 29 checkpoint. On June 5, the enemy increased the intensity of the attacks, increased the artillery, armored vehicles, snipers to the information under the noise, according to intelligence, to expand the bridgehead. The task of the Ukrainian military – to thwart the plans of the illegal armed groups. And completed the task successfully. In the battle, our troops entered without artillery, which at that time was allotted. Enemy losses of approximately 25 people.

Repeat the 2014-2015 occupants does not Shine – the level of readiness and qualification of the APU fighters has grown substantially. The groove remained under fire control of the Ukrainian army. The enemy is retreating, did not even bother to take your flag.