One dead and seven wounded soldiers of the ATO. Day in the Donbass 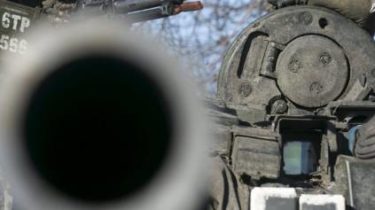 Yesterday, June 13, there were 52 fact of violation of the ceasefire regime in the Donbas. This is stated in the message press center ATO.

Coastal areas. At night, the terrorists once again shelled a residential sector of the settlement Olginka, the result of which was again damaged homes of local residents and some infrastructure. The militants also beat the anti-terrorist operation forces in the area Chermalyk, Water, Talakovki, Lebedinsky, Gotovogo, Birch and Pavlopol.

Donetsk direction. Fighters fired at strong points of ATO forces in the area of the Sands, Avdeevka, Nevel, Kamenka, Luhansk, on Svetlodarsk arc. The militants again fired several mines in residential areas of the Town. One of them exploded near the house on street Turgeneva. Shrapnel damaged the Windows and facade of the building and parked near the car. Home owners, 58-year-old woman and her 37-year-old son were not injured. However, near the other house on the street Turgenev, shrapnel mines was stabbed 48-year-old woman. The ambulance doctors diagnosed her mine blast injury and shrapnel wound of the right leg. The victim was given assistance on the spot. From the hospital she refused.

Lugansk direction. The militants fired on the defensive works in the area of Novotoshkovskoye, Crimean, Novoaleksandrovka, Happiness, stems, Villages Lugansk, Trinity and Lobachiova.

One serviceman of the armed forces of Ukraine were killed. Seven more fighters ATO forces were injured.