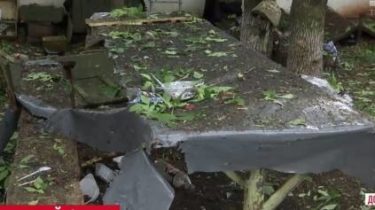 Tank and mortar attack on the outskirts Novoluganskoe in broad daylight brought new destruction to the local pig farm, which is the main employer for inhabitants of the adjacent territory on both sides of the front. From more than three dozen of the shells fired towards the positions of the APU, half fell on the territory of agricultural enterprises, according to a story TSN.19:30.

One of the shells fell right in front of the checkpoint pig and smashed the Windows in the rooms where people worked. Terrified people ran from everywhere, a day on the farm began to panic. The company employs a lot of people from the occupied areas of Donbass.