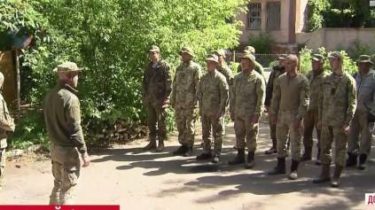 Novoluganskoe again appeared in the sight of illegal armed formations in the zone of the ATO. The Ukrainian military night fired at from grenade launchers and infantry fighting vehicles, according to a story TSN.16:45.

Heavy caliber was not used but the density of fire was such that from the shelter it was impossible to put your head out. Scared of even the local dog, who has had to get used to the war. “Dog, don’t worry, they’ll give you UBD”, – jokingly supported her military. They determined that the enemy fired from LNG and BMP, and when the fire was particularly dense and annoying – requested permission of the commanders response.

The APU usually do not respond to provocations and refrain, until the enemy attacks begin to threaten the lives of our soldiers. This time Ukrainian BMP opened counter fire in the direction of the station Dolomite, which is controlled by the militants and where the firing was conducted. “Provoke almost every night. If provoked severely, giving the answer”, – said one of the soldiers. Usually the enemy can quickly soothe a counter activity that happened this time.

On the morning of one of the participants in the battle of Yaroslav Trofimenko commander awards honors from the Minister of defence of Ukraine for exemplary service. He admits that he came to the front not for the awards, and the world for home. Says it has plans for civilian life – to propose to his girlfriend. “I want to get married, heart sunk,” admitted the fighter. The name of the lady Yaroslav did not disclose because she doesn’t know about his intentions. But hopes the answer is “Yes”.

On the eve of tank and mortar attack on the outskirts Novoluganskogo in broad daylight brought new destruction to the local pig farm, which is the main employer for inhabitants of the adjacent territory on both sides of the front. From more than three dozen of the shells fired towards the positions of the APU, half fell on the territory of agricultural enterprises.