Provocations of militants and shelling of prohibited weapons. Digest ATO 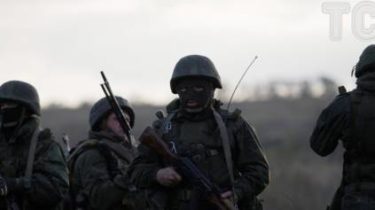 From the beginning of the day , the militants Pro-Russian illegal armed groups 20 times violated the ceasefire. Repeatedly, the militants applied artillery weapons, the use of which is prohibited by the Minsk agreements, as well as once again fired at one of the frontline settlements. Losses among the Ukrainian soldiers in the fighting today was not.

Around 7.00 PM the Russian-controlled armed gangs from jet systems of volley fire fired at residential quarters of Marinka. The shelling had damaged several houses. The walls were hewn fragments, damaged roofs and outbuildings, broken glass. Fortunately, the locals there were no injuries. On the same front, and near Pavlopolya militants fired 120-mm mortars. And near Krasnogorovka day the bandits applied mortars caliber 82 mm. in addition, mercenaries continue to resort to armed provocations against Ukrainian soldiers in the area of Shirokino, Water, Lebedinsky, Malacky and Chermalyk. Today, the enemy was shooting from grenade launchers of various modifications, heavy machine guns and small arms.

Before dawn, gunmen from the suburbs temporarily occupied Gorlovka carried out heavy shelling of the Ukrainian positions near the village South of artillery caliber of 122 mm. At the same time the invaders intensively shelled strongholds of forces ATO in the area of the Heater from the tanks and mortars of caliber of 120 mm. In the second half of the day under enemy fire from 82-mm mortars and heavy machine guns were the fortifications of the Ukrainian soldiers near Novoluganskoe. In addition, near Verhneuralskogo, and near Kamenka and in the southern suburbs of the Town, the invaders opened fire from grenade launchers and small arms of various calibres.

Here today, the invaders lowered their hostile activity. However, no violations on their part not passed. So, for the dark time of the day the enemy tried to provoke the soldiers of ATO forces in the area Novozvanivka, firing their small arms. The bandits beat from manual anti-tank grenade launchers near the village of Crimson. The day militants fired low intensity mortars caliber 82 mm at one of the Ukrainian strongholds near Katerinovka.

We will remind, for the past day militants 55 times opened fire on strong points of the Mat along the entire front line in the Donbas: seven times the militants had used banned by the Minsk agreements, artillery systems.