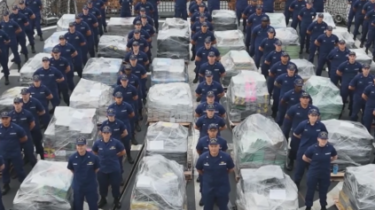 Members of the coast guard boasted seized 18 tons of cocaine on your site and the page in Facebook.

Militiamen put up photos and videos taken of the party, signing:

The drugs were seized in the period from March to June in the Eastern Pacific ocean.

They were handed over to the Agency for the fight against drugs as evidence.

The cost of all packages is half a billion dollars.

We will remind, the SBU seized in Odessa 180 kg of amphetamines. Traffickers sent to the Odessa sea port, the container, supposedly with a cargo of shoes from one of the Mediterranean countries.