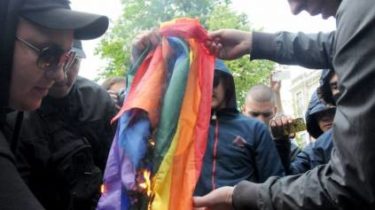 In the middle of the night the nationalists from different organizations began to block parks and the Central streets of Kiev, to prevent the holding in the capital on Sunday, June 18, the “equality March”.

“The nationalists from many organizations blocked the Park Shevchenko, Vladimirskaya street and House teachers, in order to prevent a gay parade in Kiev”, – wrote in Facebook the head of the press service of “Right sector” Artem Skoropadsky.

Earlier, the hackers broke into the website of the Ukrainian LGBT community. Militiamen promise that the law and order during the “March of dignity” will protect up to five thousand militiamen.

Videopolice to reinforce security measures in Kiev during the “equality March”