Armed provocations and the attack of prohibited weapons. Digest ATO 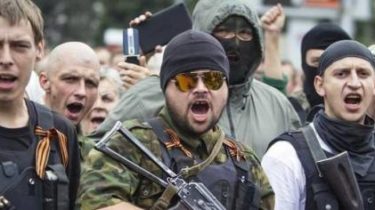 From the beginning of the day fighters 21 times fired on the Ukrainian defenders. Twice the occupants used Minsk agreements prohibited weapons systems. Most actively the opponent today resorted to armed provocations in the seaside and Lugansk directions. In the fighting, two servicemen of the Ukrainian armed forces were injured.

Even at night the illegal armed formations opened fire from the low intensity of 82-mm mortars for the fortifications of the ATO forces near Pavlopol. From grenades of various modifications, heavy machine guns and small arms, the enemy repeatedly fired Ukrainian strongholds in the area of Shirokino, Water, Talakivka and Birch. In addition, the nearby Talakivka Ukrainian soldiers fired at the enemy sniper.

On this part of the front occupants before dawn thrice fired from heavy machine guns and grenade launchers of the units of the ATO forces, which keep the defense on the southern outskirts of Avdeevka. And it’s already noon Pro-Russian gangs carried out attacks on our positions near the settlement Novoluganskoe that Swetlogorsk arc. There, under cover of fire from heavy mortars, heavy machine guns and small arms of the Ukrainian defenders was trying to get the sniper.

In this area the contact line of the first enemy’s armed provocation was recorded at night near the village of Lugansk, where insurgents opened fire from hand-held antitank grenade launchers and small arms. Subsequently, the invaders twice tight beat from grenade launchers of various systems at strong points of ATO forces, located near Novozvanovka. From 11.00 hours of the day and by this time the enemy again intensified in the area Bakhmutskaya track. There are units of Russian occupation troops have repeatedly opened fire on our defensive fortifications in the Crimean. Used the enemy 120-mm and 82-mm mortars and infantry weapons.

Earlier it was reported that the militants of the terrorist groups “LNR” and “DNR” tortured prisoners and killed at least 134 military and civilians. This was stated by the witnesses in the criminal proceedings on the facts of violations of laws in the occupied territories.