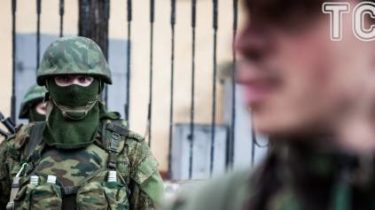 In the Donbass I detained the Russian military, which allegedly got lost on Ukrainian territory. The journalists in Kramatorsk Donetsk region, said the major-General, Deputy head of the ATO Oleksandr Razmaznin.

He has not announced neither the number nor the ranks of the security forces. The incident happened yesterday, June 18.

“The latest arrest was yesterday. Graduates of St. Petersburg state medical Academy, noting the Day of the doctor, confused direction and was on our territory. Detained, many are detained. But the fact is that not all of us can issue in the press. We take these detainees to certain structures. Our task – to fight. To hold and to give. The rest is not our business “, – quotes his quote “the Island”.

According to Rozmaznin, the detention of the Russian military in Eastern Ukraine happens quite often, but not always this is reported by journalists.

“The detainees regularly, say every day – this is not true, but quite often,” he added.

As previously reported, in the Donetsk region Ukrainian soldiers detained the militants, who lost his bearings, came to Ukrainian checkpoint. In the car were a man in a military uniform with insignia of an illegal armed formation and a resident of the city Shahtersk.