“Suffer Lvov, I will also suffer.” Bereziuk promised to spend the night under AP 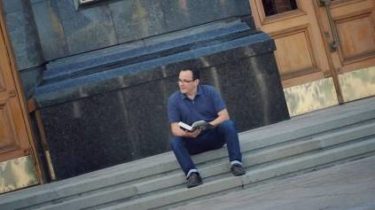 The head of the faction “Samopomich” Oleg Berezyuk, who went on hunger strike on 19 June, has promised to spend the night under the building of presidential Administration.

“The presidential administration that started it and should finish because the Prime Minister seems addicted to making. And stop making fun of people in Lviv, they know what to do. This plan is the year… I’ll be here for the night. I will use only water. Then it all depends on the President of Ukraine and Prime Minister”, – quotes “112.Ukraine” a quote Berezyuk.

He claims that last week I was in Lviv and visited a lot of streets to look at the situation.

It is noteworthy that the action under AP bereziuk arranged that day, when the President of Ukraine Petro Poroshenko has left for US. The people’s Deputy from BPP Irina Lutsenko said that “it is advantageous to starve, when the President is engaged in state Affairs”.

“It is not the function of the President and presidential Administration – to take out the garbage from the city. This Garden tie. To do this, Lvov paid the local budget with taxes”, – quotes its the quote “the Ukrainian truth”.

The speaker of Parliament Andriy Parubiy, however, expressed hope that soon the issue will be resolved and bereziuk will stop.

“I hope very soon there will be reason to Oleg Berezyuk has stopped the hunger strike,” he said.

As previously reported, in Lviv last summer, continuing problems with the removal of garbage due to the closure Gribovichi the landfillwhere the fire occurred. Lviv mayor Andriy Sadovy appealed to the Cabinet with the requirement to declare the city’s environmental emergency due to the continuation of the “junk blockade”. The mayor argued that the attempts to temporarily haul waste to other landfills stumbled upon “systemic and organized resistance,” and the Directors of other landfills where household waste was going to take temporarily, felt the pressure and threats.

Subsequently, Prime Minister Vladimir Groisman during a conference call with the regions stated that the government may allocate from the state budget of 50 million UAH for arrangement in Lviv city landfill.

Videoscopy said that garbage blockade of Lviv is still ongoing