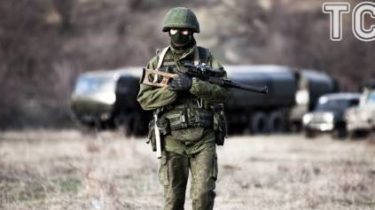 Last week from 12 to 18 June in the East of Ukraine was liquidated 16 Russian militants and 39 wounded.

This was announced by the speaker of the Ministry of defense of Ukraine the Podgorny Villena during a briefing, transfers UNIAN.

“According to intelligence, in the course of a week the total number of losses among the Russian minions is 16 killed and 39 wounded,” commented Piedmont.

According to him, half of the losses of the enemy were held in the Luhansk sector.

In addition, the representative of the defense Ministry said last week killed four members of the armed forces of Ukraine in the fighting, another 29 were injured. In addition, on 16 June in a hospital in the river one Ukrainian serviceman died from received on 8 June of wounds near Avdeevka.

Also in the conflict zone in the village of Sukha Balka killed one civilian in the town and one woman were injured. Podgorny said that last week, 68 private houses were damaged near the front line in Mariupol and Donetsk directions.

Videosister Ukrainian soldiers were wounded in the East of Ukraine

“Of course, it can be considered as the largest destruction of civilian property and infrastructure from February 2017,” he said.

“According to Ukrainian military intelligence, the escalation of hostilities in Lugansk direction was the result of the actions of militants who were trying to change the demarcation line in their favor,” said Podgorny.

He also said that over the past week, there were 19 cases of the use of enemy UAVs, which collected intelligence information.

Earlier it was reported that the militants of the terrorist groups “LNR” and “DNR” tortured prisoners and killed at least 134 military and civilians. This was stated by the witnesses in the criminal proceedings on the facts of violations of laws in the occupied territories.