Kiev can be closed to trucks because of the heat 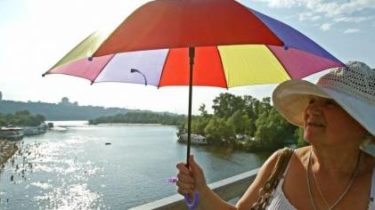 In Kiev, impose restrictions of movement of heavy transport from 10:00 to 22:00 in case of increasing air temperature to 28 degrees Celsius.

It is reported the KSCA, with reference to “kievavtodor.”

Traffic restrictions can be introduced for heavy vehicles weighing over 24 tons and with axle load exceeding 7 tons.

Appropriate changes are introduced according to the order of KGGA No. 1173 “About restriction of movement of supersize vehicles on the streets and roads of Kyiv in connection with an increase in temperature of the air.”

The police of Kiev already has operational control over observance by drivers of heavy transport traffic restriction of the road network of the capital.

Tuesday in Ukraine will be hot. Weather forecast for June 20

We will remind, on Wednesday, June 21, at night in Western and Northern regions, the day in other regions of Ukraine, except the Northern part, will be intermittent rain with thunderstorm. Some places will be gusts up to 15-20 m/sec. Wind West, North-West of 5-10 m/sec.

The temperature at night, 14-19 degrees during the day and 22-27 degrees, in the southern and Eastern regions 28-33 degrees.

In Kiev this night will be intermittent rain with thunderstorm, tomorrow will not rain. The night temperatures 17-19 degrees during the day 25-27 degrees.

Videoguide and heat. What weather waits for Ukrainians