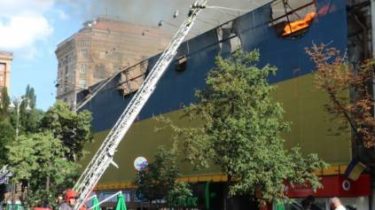 Rescuers extinguished a massive fire in Kiev, in the building between the Central Department store and the Pechersk district court. The fire is completely extinguished at 21.04 on Tuesday, June 20.

About it reports a press-service of the State service on emergency situations in Kiev.

Fire in a three-storey building covered the second floor, the wooden walls and ceilings have spread to the 3rd floor and in the attic. Total fire area was 1000 sq. m.

Rescuers prevented the spread of fire to the administrative building, which is located nearby, in particular, to the building of Pechersky regional court. In addition, firefighters carried out of the building two oxygen tanks, warning possible explosion.

Witnesses called likely cause of a large fire on Khreshchatyk

the fire burned construction materials, partitions and ceilings between the second and third floors and roof of the building. In addition, there is a threat of partial destruction of the building.

While extinguishing a fire the dead and injured were not. The cause of fire and damage is determined.

Recall, June 20, in the center of Kiev on the Khreshchatyk, 40 began a large-scale fire. The building in which the fire started, located on the corner of Khreshchatyk and Bohdan Khmelnytsky, opposite the Central Department store. This building houses catering outlets and shops, and beside the Pechersk court.