As members and fighters against corruption “helped” amber mine. In SAP unveiled criminal scheme 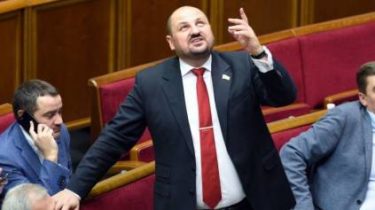 Two national deputies with the aim of receiving a bribe from a representative of the non-resident company, which is interested in the extraction of amber in Ukraine, used the right of legislative initiative. They were going to push through Parliament a draft law which should improve economic conditions for the client company.

About this informed the head of the Specialized anti-corruption prosecutors Nazar Golodnitsky during a briefing regarding the arrest of the security guard of the people’s Deputy from “BPP” Borislav Rosenblatt today, June 20.

Also the deputies, he said, promised impact on Golosnoi Agency, Ukrburshtyn and other authorities.

The representative of the company has proposed to amend the Tax and Customs codes, established by a consequence. She managed to get in touch with the Deputy Maxim Polyakov, who in turn appealed to his colleagues in Parliament – Borislav Rosenblatt, who authored the bill, which regulates the production and export of amber. So, the document has been amended, which related to reduce the rent extraction of amber from 25% to 5%, exemption from taxation until 2020, enterprises which import equipment for mining. Some changes related to remuneration.

For these changes has received a bribe in the amount of 15 thousand dollars, said Holodnitsky.

The scheme was used by the head of the Secretariat of the inter-factional Association, the assistant to one of the deputies from the Radical party and the lawyer of the organization “System solutions”. They got 11 thousand dollars for the preparation of the necessary documents.

Rosenblatt, according to the investigation, deciding to participate in the production of amber, he turned to the resident asking that the requirement for the organization of a joint business project: he was going to resolve issues with government agencies.

“The amber was exported from Ukraine at low prices, and the fraction of the actual profits should be transferred to the accounts of the company, which is located in the United States. At the insistence of Rosenblatt, co-owner of which was his own sister. The total amount of bribes in this episode amounted to 285 thousand dollars, of which 85 thousand was transferred to the first guard, who was also listed as an assistant-consultant of people’s Deputy. And when the transfer actually 200 thousand dollars was apprehension,” said Holodnitsky.

He also added that in this case while detained 6 people: three assistant deputies, one guard of the people’s Deputy, two representatives of public organizations, which carry out fight against corruption.

Earlier it was reported that investigators of the National anticorruption Bureau of Ukraine detained the security guard of the people’s Deputy from BPP Borislav Rosenblatt during receiving a bribe of 200 thousand dollars. Rosenblatt called it a provocationcaused by discontent with his activities.