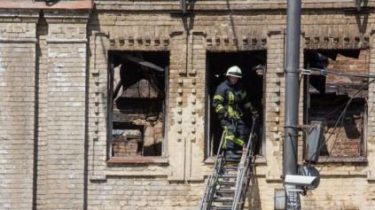 At KCSA say that the place of the burnt on Khreshchatyk historic buildings don’t grow 12-storey building, in the event of failure of the owner to restore the building back to the city. This is stated in the story TSN.16.45.

The morning firemen cleared the debris of a house that burned yesterday in the capital. The bare walls were filled with water, to prevent re-ignition. Only recently turned fire hoses. Before this fire was continued from time to time to fill the room, to avoid re-ignition.

The fire burnt more than a thousand square meters. Is it possible to restore the building, while no one can say. Preliminary official version of the fire was announced by the officials. They say that on the floor illegally worked as builders and they were the cause of the fire.

“On the 2-3 floors shouldn’t be, but there were some jobs which, according to preliminary information, not yet confirmed, is the reason”, – said the first Deputy head of Kyiv city state administration Gennady Pils

Activists say that it was arson, and the building, but rather a tidbit of land in the centre there is a long struggle. Since 2009, this building is officially a monument of history and architecture of local value – hotel “Cana” was built in 1874.

The owner of the house is up “Investment and development”. In 2013, the Ministry of culture issued permission for the restoration of the building. The owner was repeatedly violated the terms of the security agreement, but only last month was fined and the money he paid.

Deputy mayor Alexander Spasibo says that this memo is only possible two types of works – restoration or re-creation. To date, no project documentation in the urban cadastre is not registered, so the project is not valid.

The duty to monitor the condition of the building to follow imposed on the owner if the owner refuses to restore the building, there is another option – to transfer to it the property of the city.

We will remind, large-scale fire occurred on Khreschatyk street on June 20. The building, which erupted, located on the corner of Khreshchatyk and Bohdan Khmelnytsky, opposite the Central Department store. There are catering outlets and shops, and beside the Pechersk court. Rescuers extinguished the fire late in the evening. The fire burned construction materials, partitions and ceilings between the second and third floors and roof of the building. In addition, there is the threat of partial destruction of the building. While extinguishing a fire the dead and injured were not.