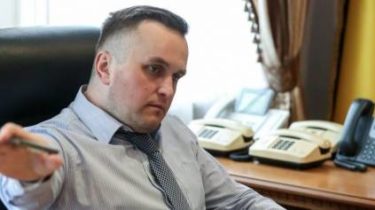 Dismissed the Chairman of the SFS Roman Nasirov threatened the head of SAP Nazar Holodnitsky prison. This was the head of the Special anti-corruption Prosecutor’s office said during a joint press conference with the Director of NABU Artem Sytnik.

“I respect the sport federations, including the Federation of judo. Unfortunately, the last conversation with Roman Nasirov over the fact that sooner or later he would put me. But it is. So congratulations to him should not expect”, – said the Holodnitsky.

“A word about metastasis is the hot word hot guys. Well. Everything happens in life. I Holodnitsky. I – cold”, – he added.

Earlier, Nazar Golodnitsky told why Nasirov not allowed in the US for “treatment” and why it doesn’t show British passport.

Videoecological the NAB and anti-corruption prosecutors quarreled in the media