The court has sent to jail assistant Polyakova: the MP hoped that the pledge will paid by the parents 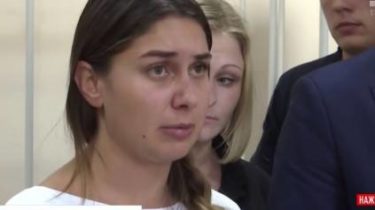 In the Solomensky court of Kiev elected a measure of restraint for six detainees at so-called amber case involving deputies Rosenblatt and Polyakov. Assistant latest Tatiana Lubenko already decided to keep in custody in the next two months, says the story TSN.19:30.

According to investigators, 28-year-old girl received a bribe in the amount of 7.5 thousand dollars. The money supposedly intended MPs Polyakov and Rosenblatt the preference of the individual companies in the extraction of amber in Ukraine. The deputies offered to take suspects on bail, but the court decided to accept the idea of prosecutors at the 2-month arrest, but the amount of collateral specified by the charge, reduced by more than half to freedom Lubenko can get in exchange for 160 thousand hryvnias.

She suspected claims that this amount is unaffordable for her. “I think that it is unfair. Because I don’t look corrupt, and are not corrupt. There the conditions were terrible, at least for girls,” explained Lubonka. But her boss, the Deputy of the Poles, said the amount is acceptable. “It’s not so high actually amount to I helped. I think her parents would be enough. If not – Tatyana has more than enough friends that we all helped,” said the Deputy.

The court then moved on to consideration of a question on election of a measure of restraint for the Chairman of the public organization “people’s control” Vadim Rudenko. The case of four defendants, most likely, will be considered on Thursday morning. The deadline is until 15:00.