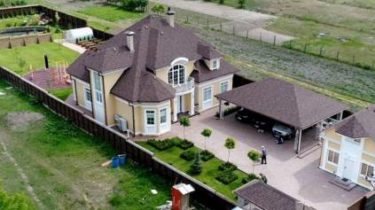 The new head of the Office of counterintelligence protection of state interests in the sphere of economic security of SBU Sergey Konokhov he owns real estate. However, he cannot explain where he got the money for the purchase of this property.

In the official registry of the Ministry of interior notes that Sergei Konkov in 2015 purchased a SUV Toyota Land Cruiser 200 cost about 40 thousand dollars. Prior to that, he had a Lexus LX 570, which is now in the secondary market is worth about 50 thousand dollars.

In January 2014, he bought an apartment with an area of 55 square meters on the street of the Church near the Independence square in CIV. This apartment can now be purchased for 150 thousand dollars (about 4 million).

Next year Konkov bought a house nearly 300 square meters in the village of Yurivka, near Kiev. This two-storey house with a guest house, sports court, greenhouse and a pond. Land in Uroki you can buy for the price of half a million hryvnia for 10 acres. Open the registry notes that Konuhov is the only owner of the house.

The salary of the employee of SBU even in leadership positions does not exceed 30 thousand UAH per month, says the investigation.

Shufrich has unveiled a woman who bought real estate worth millions of dollars. Exclusive to TSN

“Sergei Konohova young wife who, it seems, has no business raising a child, and his ex-wife is also a civil servant – works in a state company “Ukrtransgaz”, – noted journalists.

The head of the economic counterintelligence of SBU refused to explain to journalists how he got the money for luxury property. In response to the request of journalists to the SBU reported that Kanokov, like all intelligence officers, were internal audit, and the issues it has not arisen.

Property Leshchenko: the MP commented on the rumors about the “rented from a friend estate”

We will remind, earlier journalists of the program “Schemes” reported that some employees of the same management SBU drive luxury cars that can cost significantly more than their salary.

Reporters for several days watched what cars come to work the staff of the economic Department of the SBU. It turned out that some of the recorded cars officially do not belong to Sbusy, and their parents who have low incomes.

Edition of the program also reported that the security Service of Ukraine carried out the pressure on the programto prevent the airing of issue of corruption in the ranks of the SBU. A half hour before the ether, when the issue was fully installed and changes are already technically impossible, Radio Liberty received a letter signed by the Chairman of the head of Department of interaction with mass-media Elena Gtseiko with a hint of criminal liability in the case of the plot.