The provision of weapons and sanctions against Russia: it became known what he was talking about Tillerson and Poroshenko 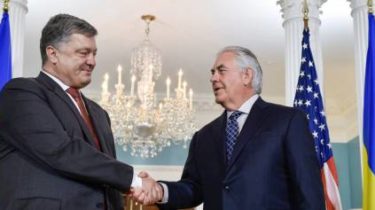 U.S. Secretary of state Rex Tillerson confirmed the U.S. readiness to promote settlement of the conflict in the Donbas.

He said this during a meeting with Ukrainian President Petro Poroshenko in Washington, the press service of the presidential Administration.

“Rex Tillerson confirmed the U.S. readiness to promote peaceful settlement of the situation in the Donbas. U.S. Secretary of state confirmed the continuation of the sanctions against Russia until full recovery of the sovereignty and territorial integrity of Ukraine”, – stated in the message.

Tillerson and Poroshenko have coordinated their positions ahead of the G20 meeting, Germany for the cessation of Russian aggression in the Donbass and the return of Crimea. Poroshenko has submitted proposals for a more active involvement of the United States to the peace process in the Donbass.

Also politicians discussed the liberation of the Ukrainian hostages, ways of providing defensive weapons to Ukraine, strengthening investment, economic and trade cooperation between the two countries, ways of institutionalizing bilateral cooperation in the sphere of security and the like.

We will remind, on June 20 President of Ukraine Petro Poroshenko met with US President Donald trump. Poroshenko said that the sanctions of the United States against Russia will continue. Answering the question whether the head of state a clear confirmation from the U.S. President that sanctions against Russia will not be removed until until it is returned to the Crimea and will not stop Russian aggression against Ukraine, Poroshenko replied in the affirmative. More podrobnostei of the meeting Poroshenko and the tramp read online Dnia.