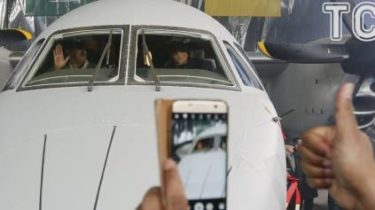 Ukrainian negotiators agree on multimillion-dollar contracts at the air show in Le Bourget. Saudi Arabia has expressed interest in the acquisition of new “Antonov”, says the story TSN.19:30.

“I had talks with “Saudi”. As one of the options of replenishing their fleet, they are considering our An-132. Now we are talking about 10-15 aircraft,” – said the President of “Antonov” Alexander Kotsyuba.

Video settings Paris, our pilots demonstrated the unique capabilities of the new aircraft An-132

Ukrainian planes are interesting for the EU. Already signed in France contracts, the famous “Ruslan”will help to fly into space, the European satellites. “The an-124 to transport satellites, helicopters – all the necessary equipment around the world,” – said the Director of the logistics company “Bollore” Karin Dentler. “Antonov” does not hide that it is for Ukraine – a very large contract.

Negotiations are ongoing not only in special halls, but the new An-132. Potential customers consider as a means of transport of huge generators, turbines and humanitarian goods. “Every day is filled with negotiations. The signing of the contract is hard work. Need to wash tons of gravel to wash gold nuggets – signed contract,” – said the Director of the airline “Antonov Airlines” Mikhail Kharchenko.

Ukrainian An-132D made its first flight, hitting the participants of the “Le Bourget”

Meanwhile, Ukrainian pilots are preparing for the next demonstration flight. The last time they are so cool came to landthat attracted the attention of air show organizers. Say to those that saw the unique capabilities of the Ukrainian plane, but please do not fly it like a fighter plane.