Europe supports you, but you have a right to expect more. Tusk made a statement on the Ukrainian 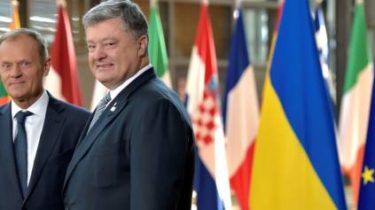 The Ukrainian people deserve more respect in Europe and the support of the European Union. This was stated by the head of the European Council Donald Tusk at a joint briefing with Ukrainian President Petro Poroshenko in Brussels, reports UKRINFORM.

“Dear Ukrainian friends. I want to congratulate you and thank you. To congratulate with the fact that, despite the dramatic circumstances and obstacles, despite the war in Eastern Ukraine, you could get visa-free regime. And I want to thank you for your Pro-European commitment. And the courage with which you defend your independence,” he said.

He stressed that for the success of Ukrainians has paid well, alas, and blood.

“You deserve everything you have achieved. And this is why in Europe applaud this and support you. Although I know that this is not enough. You have the right to expect more. You also have the right to be proud of themselves,” – said Tusk.

Recall that after the United States Poroshenko flew on a working visit to Brussels. In addition to meeting with Tusk, he will have a conversation with the head of the European people’s party Joseph Golem and other leaders of the member States of the EU. In addition, the President will participate in the enlarged Summit of the European people’s party.