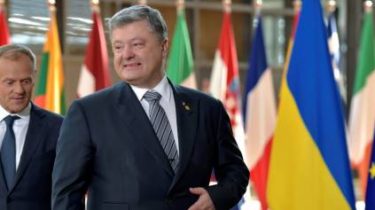 June 22 the President of Ukraine Petro Poroshenko after a meeting with President of the European Council Donald Tusk in Brussels assured that the Association agreement will take effect in full from 1 September.

It will be ratified in the near future. According to uranta, the last two months have been for our state victories.

The U.S. Congress will expedite consideration of the resolution on recognizing the Holodomor as genocide of Ukrainians – Poroshenko

“The last two months – a time of big wins for Ukraine. It is very important that Ukraine has received the right to visa-free travel to European countries”, – said Poroshenko.

From 1 September, the Association Agreement will work in full – Poroshenko pic.twitter.com/hyHx603nFp

Honored to meet today with my great friend the President of the European Council Donald Tusk. Ukraine and the EU closer than ever until now pic.twitter.com/xnjUbCAn0I

As previously reported, Poroshenko went to Brussels after his visit to the U.S., where he met with President Donald trump.