The explosion of a car in the centre of Kiev could organize special services of the Russian Federation. 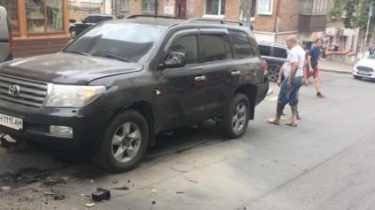 The explosion of the Toyota SUV, which occurred on the morning of June 23 in the center of Kiev, linked to the involved land transactions Sevastopol businessman Herman Hayduk. This was reported in Facebook the people’s Deputy Dmitry Belotserkovets.

According to him, this is not confirmed information. Hayduk himself, according to media reports, was wounded and survived.

“He was the founder of many of the controversial land cooperatives in Sevastopol. In his “elite” residential cooperatives included many members of the city Council, judges, prosecutors in Sevastopol. In fact, he assigned to the cooperatives under the business and were calculated with the MPs and security forces areas or square meters. Such a small land allotments without competition and competitive reasons that led to the theft of many hectares of land Sevastopol”, – stated in the message.

The MP believes that the soldier may possess important information about the traitors who voted for the annexation of the Peninsula. To make an explosion, according to policy, could the Russian security services.

“I would venture to suggest that this attempt can be arranged, including Russian security forces, depending on the purpose of stay Haiduk in Kiev. Glad the soldier is alive, he’s lucky he may be useful to the Crimean Prosecutor’s office of Ukraine”, – stated in the message.

The explosion of a car Sevastopol accommodation in the centre of Kiev, linked my (not yet confirmed) information Sevast…

As previously reported, on Friday, June 23, in the center of Kiev exploded a luxury SUV Toyota Land Cruiser with Sevastopol numbers. The incident occurred around 10 a.m. at the intersection of Turgenev and Poltava, between the circus and the station Lukyanivska. Driver transportowo funds received lacerations of the legs.