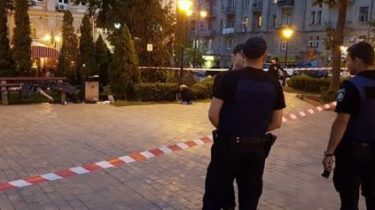 The killer of the man at the metro station “Golden Gate” in Kiev was previously convicted 58-year-old resident of the capital.

Militiamen established that the man in the evening of 22 June in a state of alcoholic intoxication came to a street musician and began to pester him and tried to strike. To calm aggressive man wanted 57-year-old father of a musician. He took rowdy for the house, where he stabbed.

Details of the double murder at Poltava: the victims could bury still alive

Later a young man in the Park found a father with stab wounds: medics ambulance at this time provided him with the necessary assistance. From hitting with melee weapons, the man died.

“It was established that the suspect is 58 – year-old resident of Kyiv, previously convicted. He seized the knife and clothes with blood. The attacker was detained in order St. 208 Criminal procedure code of Ukraine”, – stated in the message.

As previously reported, on June 22, in the evening near Golden gate capital murder. The victim was the head of the Union migrants Sergey Oleynik.