Why in Kiev suddenly breaking out a historic house? 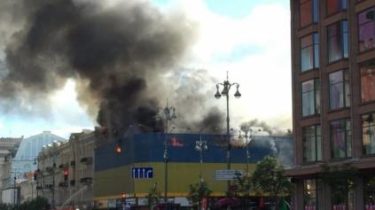 In Kyiv, the volunteers found more than 200 abandoned historic homes that no one is restoring, but they sometimes suddenly break out.

The fire in the former building of the Central Department store on Khreshchatyk in Kyiv, which is a monument of architecture, which occurred on Tuesday, June 20, sparked a debate among the people of Kiev on the preservation of historic buildings in the capital.

While police are investigating the cause of the incident, activists who defend the preservation of the historical center of Kiev, I have no doubt that a former grocery store caught fire not just.

“Sure it’s arson! That failed to destroy the Germans (the Nazi regime – Ed.) the Bolsheviks, who destroyed modern barbarians-invaders of Kiev”, – wrote on his page on the social network Facebook the former city Council member, activist Yelena Tereshchenko-Eskina.

The Central grocery is the oldest of those still standing in the capital. It was built in 1874 as a hotel, “cane” is one of the places of worship for Kievans of that time.

In Soviet times, the building opened a grocery store, which ceased operations only in 2004 allegedly due to reconstruction. In 2008, the city Council took the decision to sell the land on which the building is located. Land bought OOO “AB Investment and development”. The company wanted to restore the building, but not on historical, but on his own project.

“From the object it was planned to leave only the facade walls and write on them the future multi-story office center with two underground Parking. We have long blocked the illegal reconstruction of this monument,” says Tereshchenko-Eskina.

The opening of the road to the dubious reconstruction was the target of arson, convinced activist.

This scheme to “legalize” the construction of new offices or shopping centres in the historical part of Kiev is widespread, said a member of the Board of the Society of protection of monuments of history and cultural heritage of Ukraine Irina Nikiforova.

“Such schemes of destruction of buildings-monuments developed over the years. Building for a penny buy in the property, and then all sorts of ways brought to destruction for a long time nothing restored, it itself is destroyed, setting fires to accelerate the destruction,” – said Nikiforov.

She argues that this scheme in particular was involved in the destruction of houses in the street Alla Tarasova, 4, where the burned abandoned house, built in 1906, the estate Murashko (Mala Zhytomyrska street in the center of Kiev – Ed.) the monument, where the new private owners had planned to build a hotel.

There have been several arsons. Historian-architect Kateryna Lypa indicates that the historical value of the landmark buildings of the new owners are mainly not interested.

Videopoke fire: looks like a burned house on Khreshchatyk from the height

More valuable is the land in the center of Kiev, so the assurances from them that the restoration work, they say, will be held following the transfer of the property, is a common lie.

“Much cheaper to build new than to restore. Because you need a licensed design Bureau, must build only a licensed construction and restoration firm. And all this extremely expensive project, therefore, set fire to,” explains Linden.

In search of owner

Another way of manipulation with historical buildings lawyers call the lack of information about property rights in the official registries.

Most of these houses were transferred to the ownership in 1990-ies, therefore, information about the owners of real estate are hard to find in the registries. Sometimes information about the owners of historic houses is not in Bureau of technical inventory, nor in the Ministry of justice. So no one’s home the persons concerned in the fraudulent schemes of legalization of documents by notaries public to take the property, all kinds of ways brought to destruction and the land under the former home to resell.

In the Kiev city administration was not full of information about the owners sold monuments before in 2016 while trying to dismantle a historic building on the street of Bohdan Khmelnytsky, has not collapsed walls, under the rubble which killed people.

Then the mayor of Kiev Vitali Klitschko instructed to make an inventory of the monuments and establish their respective owners. The process lasts for more than a year.

“In many cases, the owners or cannot be found, or he (or she – Ed.) does not provide access to the home and appropriate documentation,” – said DW in a press-service of the curator of the inventory, the Deputy mayor of Kiev Petro Panteleyev.

The inaction of the government

The journalists “access to the truth” decided to help the officials.

“We are for the open public all data is found – basically it is a legal or natural person. Been a problem with companies registered in offshore zones, although the participants of real estate market we have them all installed. But the authorities did not react”, – said the editor of the publication Lesya Ganzha.

The representative of public organization “Andreevskoe-the infinity initiative” Irina Nevmerzhytska indicates that in the law of Ukraine “About cultural heritage protection” mechanism on how to force the owner to fulfil its obligation to restore the historical monument, in particular signing him a security contract.

But the city government ignored it.

“The trouble is inactivity. Absolutely no desire of officials to do something. Might be some emergency has collapsed or burnt places – all begin to assure that will solve the problem. But this fuse lasts for exactly two weeks. Then everything is forgotten”, says Nevmerzhytskiy.

She pointed out that in the Criminal code there is article “bringing historic sites to destruction”, but the number of criminal proceedings under this article, according to counsel, is “deplorable” because of the inaction of the police and prosecutors.

Therefore, the activists are trying to fight for the preservation of historic buildings by all available means, attract the attention of Kyiv residents to the problem in public actions, writing petitions, through lawsuits trying to bring monuments to the communal property, even develop their own registers of monuments of Kiev, the official alternative.

Coordinator tour Desk “Interesting Kiev” Arseniy Finberg, along with other volunteers created the site “the code of monuments of history and culture”, which has made more than 2.5 thousand architectural monuments of Kiev with photos and historical information about each object.

“We found that in Kiev in the state of destruction is now more than 200 monuments. Hundreds of historic buildings completely destroyed over the last twenty years,” said Finberg.

The problem of the decline of historic buildings is extremely worried about Kiev.

E-petition to the Kyiv city state administration Arseny Finberg calling prevent the destruction of historical monuments in Kiev, one of the first recruited more than ten thousand signatures. In it, the activist demanded to create a single registry of historical monuments and monuments of the Ukrainian capital, to explore all the schemes through which destroyed these buildings in years past, and close the opportunity in the future with the help of the law. But neither the first nor the second requirement of the petition the Kiev authorities have not fulfilled.