A warm welcome and “utiranie nose” Putin. The main thing about the first meeting of Macron and Poroshenko 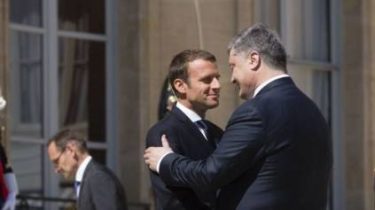 Today, June 26, the President of Ukraine Petro Poroshenko arrived in Paris, where he met with the President of France Emmanuel Macron. It is worth noting that this is the first meeting with Poroshenko, the newly elected French leader, because the earlier policy did not met in person – only had one phone conversation.

The program of the official visit of Petro Poroshenko in Paris also envisages meetings with the leadership of the French Senate, government, and communication with the Ukrainian community throughout the country. 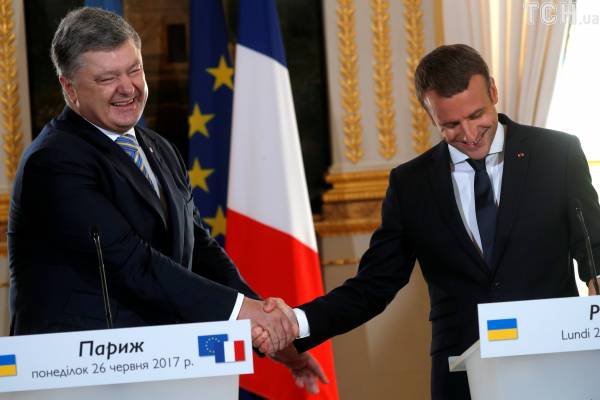 The French leader met Poroshenko on the porch of the Elysee Palace, after which the leaders went inside and began negotiations. In the photo you can see politicians smile at each other and a friendly hug. Note that his visit to France, President of Ukraine made after trips to Brussels and the USA.

The French President announced a meeting of the leaders of the Normandy format on resolving the situation in Donbas.

According to Macron, the meeting leaders will take place in late June – early July 2017.

“Regarding the date, she decided. It will be somewhere between late June – early July. The four of us now in the next few hours will solve it between the parties”, – said the head of France.

Also Makron added that France is ready to work and ready to hold a new discussion in the framework of the Normandy format.

In turn, Poroshenko said that the parties have already agreed on the consultation Channel format for processing of proposals for the leaders ‘ meeting.

Draft decisions of the “Norman format”, which can be called “formula Rules” can become the plan of de-occupation of the Donbass, said the President of Ukraine Petro Poroshenko.

“Our agreement that we will put on paper the projects of possible solutions to the “Normandy format”, perhaps they will be called “formula Rules”, but we will be able to show the public a plan for peace and de-occupation of the East of Ukraine”, – said Poroshenko.

In turn, macron said that France awaits the result.

“The solution which I suggested to the President Poroshenko, to all parties of the Normandy format and, in fact, I already did this to President Putin: I would like to first was in the paper set out the preliminary conditions that need to be done, the efforts to implement the party”.

The Annexation Of The Crimea

Macron focused attention on the problem of the occupied Crimea, saying that France clearly takes the position that the internationally recognized borders of Ukraine should remain unchanged.

“We do intend to continue the Minsk process and before the meeting “Big twenty” we support the idea to resume active cooperation in the “channel format” with the involvement of the OSCE is that I offered to all parties. After the discussion I had with Mr Putin, we really stated the facts that talked about the development of the situation. If we are talking about Russia’s takeover of Crimea, France has always supported Ukraine’s sovereignty within those boundaries which have been recognized at the international level, accordingly, France does not recognize and does not recognize the annexation of the Crimea”, – he said.