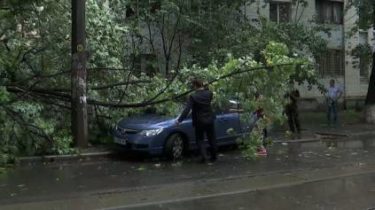 After lunch some of the districts of Kiev was covered with a strong, short shower. In particular, heavy rain with the hurricane swept over the Podil, Obolon, Troyeshchyna and several districts of the capital.

Kiev began to publish in social networks live with the consequences of downpours. So, on the hem of the powerful gusts of wind, the tree rolled the car. As a result, nobody was hurt, and the car managed to pull out from under the branches almost intact.

Also the footage shows how some of the streets flood, and the wheels of cars almost completely under water. Users report that it is in the street Stetsenko.

In Kiev, it was raining.

The hem also podtopilo several streets and passers-by had to cross via a makeshift bridge – a conventional shop has moved through a deep puddle, so that people could get on the dry side of the street.

But Kiev zoo published a video in which animals are happy today sink. “And are You glad today’s storm as did our elephant and the Hippo?”, reads the caption to the video.

The zoo is a place that brings joy!

And are You glad today’s storm as did our elephant and Hippo?

Note Ukrgidromettsentr warned Ukrainians about thunderstorms and with hail showers on 26 and 27 June. So, on June 27 during the day in Vinnytsia, Cherkasy, Poltava, Sumy, Kharkiv, Dnipropetrovsk, Kirovograd, Mykolaiv, Odessa regions of thunderstorms, sometimes hail and squalls of 15-20 m/sec.