Details of the undermining of Colonel Gur in Kiev: the explosives could lay in auto service station 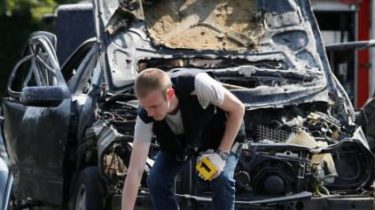 Intelligence officer, defense Maxim Shapoval died in the explosion in Kiev, in official cars, which could be mined for a HUNDRED.

This is with reference to sources in law enforcement bodies writes “Еспресо.TV”.

According to law enforcement, previously the machine had been repaired on one of the stations, where it could lay explosives from half a kilo to a kilo of TNT, in particular, in the driver’s seat.

The Network has released the first photo of Colonel Gur, who was killed during the blasting of a car in Kiev

“The explosion was from within and not from outside. That is, the bomb was planted inside the cabin – the body is curved under the pressure of the blast wave out”, – says the publication, noting that during the murder of the journalist Pavel Sheremet and the bomb was attached outside.

At the same time, it is noted that on the night before the tragedy, the car was in the underground Parking in the building on the street of machine Operators, where lived Colonel.

In addition, law enforcement agencies told that under the seat in a car, next to the bomb was a fire extinguisher, which rosellas the mixture, making the car not broke.