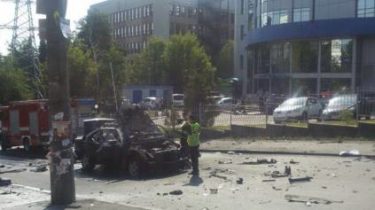 With the explosion of the Mercedes in Solomenskiy district of Kiev killed a soldier.

This was announced on his page in Facebook spokesman for the Metropolitan police Oksana Blischik.

According to militiamen, in addition, suffered from explosion from Kiev, born in 1990, now she was hospitalized.

“Previously, she has shrapnel wounds to the legs, to her life threatens nothing”, – added the police.

At the same time, the sources of TSN reported that the exploding one is assigned to Romas Dmitry (born in 1987).

Note that while the name of the deceased is not known, but the Director of the Department of communications, Ministry of internal Affairs Artem Shevchenko said that the man was born in 1978, says “Еспресо.TV”.

In addition, Shevchenko told about the injured elderly man was hospitalized with minor injuries.

In turn, “Ukrainian truth”, citing sources in law enforcement, said that is a dead Maxim Shapoval, who led the special forces of the Main intelligence Directorate of the defense Ministry.

Recall, today, June 27, in the morning in Kiev, a massive explosion, during which smashed the car completely burnt out. It happened near the junction of streets Solomenskaya and Mechanics in Solomenskiy district of the capital. Users of social networks suggest that Mercedes could detonate a bomb because the blast blew off even the roof of the car. Also note that the explosion was heard almost in the entire district.