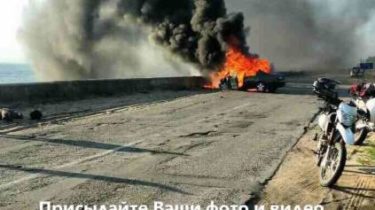 Accident near Kiev led to the ignition of another car for the day. This time a car erupted after a head-on collision with a motorcycle.

It is reported resource ДТП.kiev.ua on his page in the social network.

“A motorcycle with a passenger was driving on the highway in the direction of Lebedevka near the Kyiv sea, where it collided head-on with a car. Motorcyclist with broken arms and legs in a critical condition was taken to hospital ambulance along with his companion. The driver of the car – the girl who was injured less,” – noted in the message.

Fiery hell! A head-on collision of the motorcycle and the car! Right now accident near Kiev with the victims! �Motorcycle with a passenger…

We will remind, this morning in Boryspil highway accident occurred, after which the machine caught fire. According to the data, after the collision the vehicles caught fire Daewoo. Injured at least 5 people, including a child.