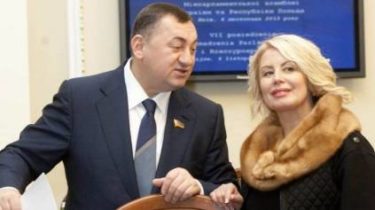 In response to the request of the publication in the press service of the AP reported: “the preamble of the decree is General, it is not concretized merit (contribution) of each awarded person. Specific services (contribution) are specified in award letters that are sent together with the idea of awarding. “However, award letters contain sensitive information about individuals (personal data), therefore, may not be transferred to third parties”.

Suspected of illicit enrichment odious Kulik was appointed to the GPU

On the question of whether the withdrawn awards MPs Konstantin Isakin (PPB) and Alexander Gerega (independent), Chernihiv mayor Vladislav Atroshenko and the Deputy chief of Department of the Prosecutor General Konstantin Kulik, the AP said, “the Procedure of “review” of awards is not provided”.

Reporters found that the President of Ukraine Petro Poroshenko on the occasion of the Constitution Day were awarded state awards of the people’s Deputy Alexander Gerega and the mayor of Chernihiv Vladislav Atroshenko, who voted for the dictatorial laws on January 16.

Previously, Kulik was accused of illicit enrichment. In particular, it is established that he purchased the apartment in Central Kiev that have registered on the civil wife and mother, and Parking lots. These assets are not reflected in the Declaration of the official. In addition, the Prosecutor did not specify in the Declaration for 2013 auto Toyota Land Cruiser 100, which he started to use in 2010 on the basis of power of attorney issued by Vladimir Zhilin – the father of one of the leaders of the terrorist organization “Oplot” Evgeny Zhilin.